Texas Instruments – India conducts TI Analog Design Contest annually to encourage System level design projects using TI’s broad range of high performance analog integrated circuits. In the first round, they select 20 teams from the all the entries from India and award a cash prize of $1500 to each team. These top twenty teams will compete in the final round to win the Engibous Prize for their innovation. The first prize amount of $10,000, the Second prize amount of $7500 and third prize amount of $5000 will be awarded to the final winners.

Three teams from BVRIT have participated in the TI Analog Design contest 2010. The teams are

Nitin Menon & Akhila won a prize amount of $1500 in the first round and US $3750 in the final round. They were adjudged the first runner up jointly with Amrita school of Engineering, Coimbatore for their innovative product.

The ATL team with the paper titled “Smart Wheel Chair with Patient Monitoring-Our Effort to Make the Disabled Independent” have won the Gold Medal and the Best Paper Award at the International Conference on Electrical and Electronics Engineering organized by Asian Society for Academic Research held at Pune on April 28. The team consists U. L Prabhash Kumar, K. Sampath Kumar, Sriram Hariharan and Vamshi Adi, all being CSE 3rd year students. 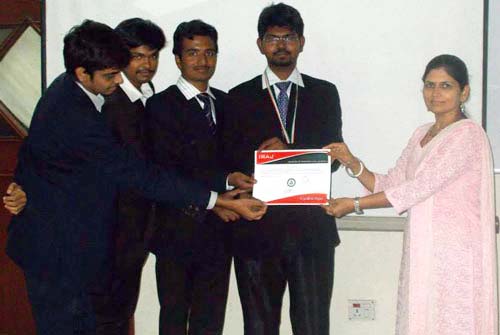